On the first Friday of September, dk Gallery held its “Mr. and Mrs.” show, celebrating artistic couples in the Marietta and Atlanta community. One of these duos was Ron and Holly Irwin who showcased their iconic figure and abstract paintings, some of which they collaborated on. Holly is a well-known name in the gallery and is known for her eye-catching, fashionable figures; she recently celebrated her 10th anniversary of working with dk. Ron is a construction man turned artist who is fairly new to the gallery world, but his abstract works have proven to be incredibly dynamic and full of energy. This creative couple has been married for 40 years and they have inspired as well as challenged each other, capturing the spirit of what the “Mr. and Mrs.” show is all about. 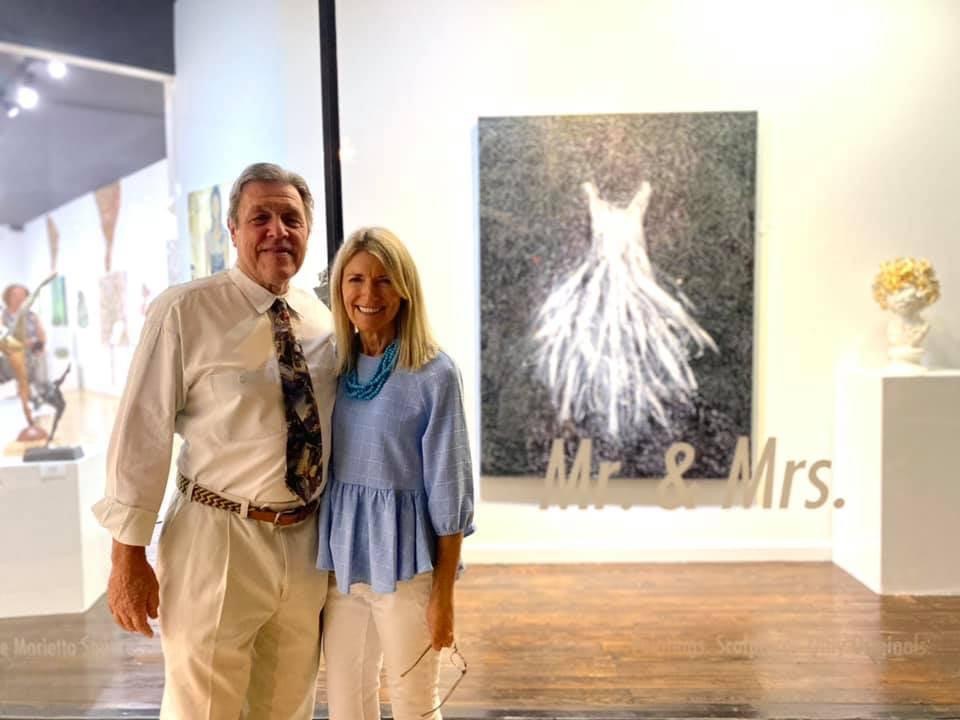 Holly grew up in a creative household with her mother being a fashion illustrator. Her childhood was surrounded with colorful lengths of fabric and figure sketches, which helped plant imaginative ideas in Holly from a young age. Her mother encouraged her to get formal art training, so Holly began taking classes at age 11. A few years later, he was recommended by her art teacher for a reputable program with Carnegie Mellon University, where she would be instructed by seasoned art professors. As she gained experience, she began reflecting on her childhood experiences as she could not get the beautiful clothes and figure drawings out of her head. Holly considers the work of her mother having a tremendous influence on her style, and it definitely shines through in her figure work. Holly was not always a full time artist, however, and actually held a corporate job for 15 years. After being diagnosed with several chronic conditions including rheumatoid arthritis, she left her job and realized she needed to reexamine her priorities. Holly remembers this as a dark time in her life, however, it brought her back to art; this is when her style blossomed and she found hope. She was able to get through the painful days with the support Ron gave her and the ability to create in her studio. She considers herself a lifetime student of art and is always immersed in her craft. Holly sketches every day, usually at night; sometimes, when she and Ron are watching movies from the 1940’s-1950’s era, she will sketch what the women are wearing as she is inspired by the clothing. Holly’s work is loved by many and it is often said that people can identify with her pieces. This is mindblowing to Holly and it is truly a gift to her because she never feels like a piece is done unless it has its own personality. Until it feels real to her, she knows it is not complete and it is rewarding when people can connect to her work.

Ron’s upbringing was a little different from Holly’s as he grew up in a military home. However, he had a natural creative knack in the world of construction, being involved in every aspect of home building from framing, installation, and final visual touches. He admitted that living with an artist will eventually rub off on a person because after 38 years in home construction, he walked into Holly’s studio one day and picked up a paintbrush. Ron realized he could combine this newfound love of painting with his other passion by using construction tools in his work such as sheetrock tools. He began playing with multiple layers of color and found inspiration through Holly while still maintaining his own style. When the COVID-19 pandemic hit in 2020, however, this awakened a whole new energy and inspiration for Ron. Just like everyone around the world, Ron was dealing with a lot of worry and frustration and he needed an outlet. Up until this time, Holly’s studio was in the basement of their home and when one of them was creating art, the other would find somewhere else to work. Ron laughingly stated that two artists cannot work in the same studio as it is like two rams butting heads. That was when he decided his pandemic project would be designing and building a new studio for Holly so they could both have their space to make art. This process brought Ron back to his youth and gave him and Holly the invigoration they needed. Once the studio was completed, Ron traded his hard hat for an artist cap and began painting again. This time, he started working with big canvases having discovered that he felt too confined working with small canvases and he wanted more freedom. At the end of 2020, he began making his abstract work. 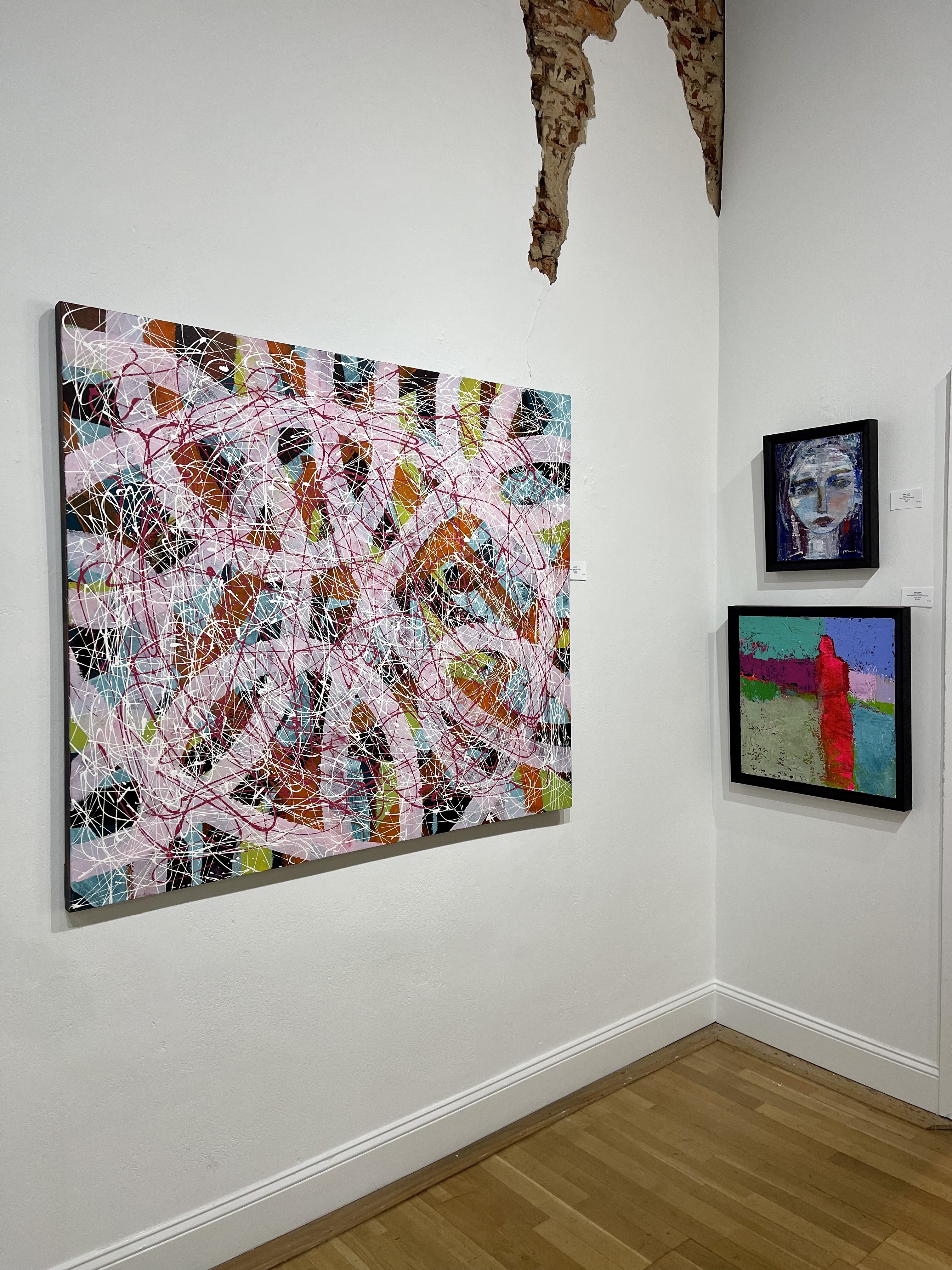 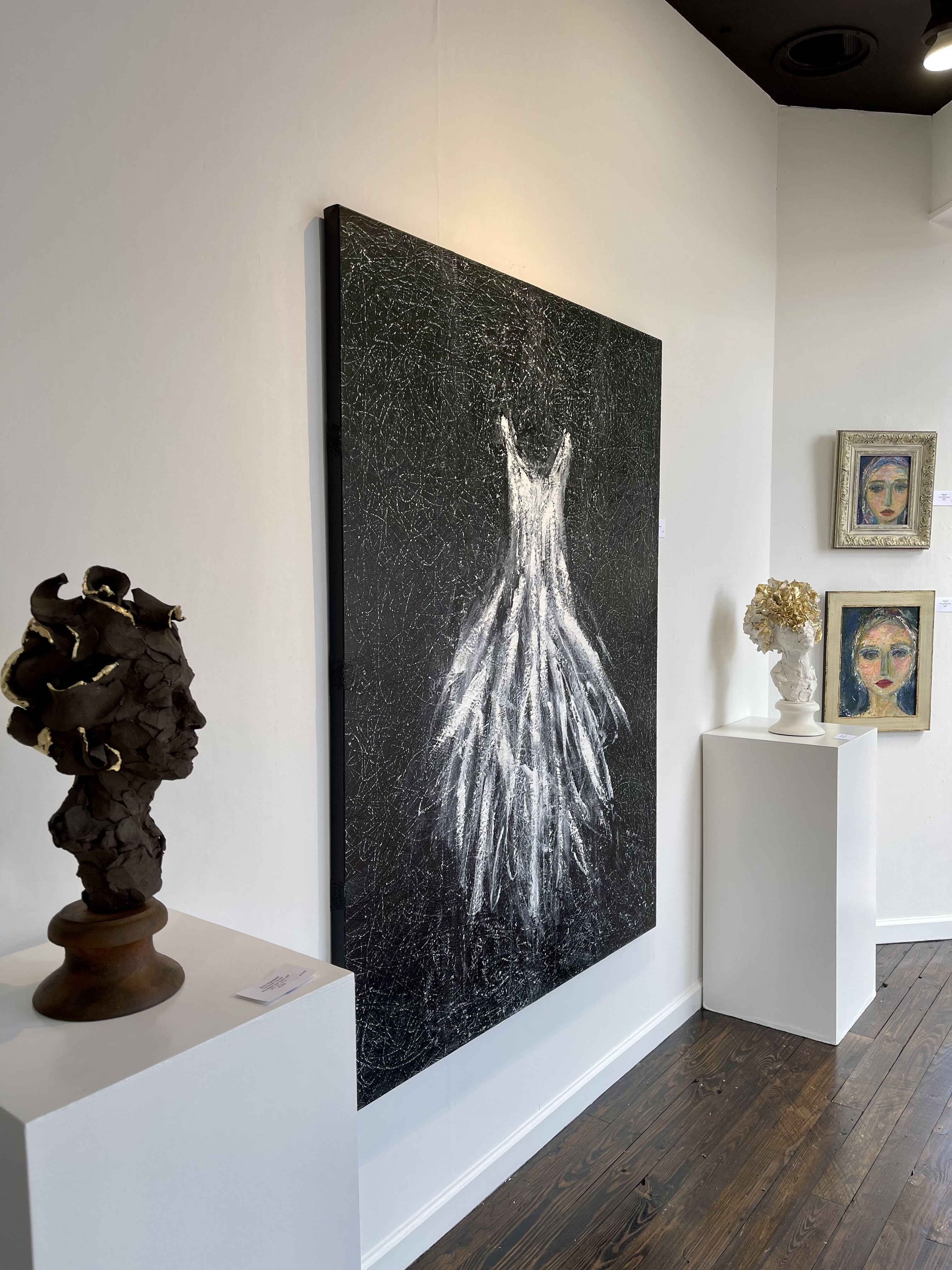 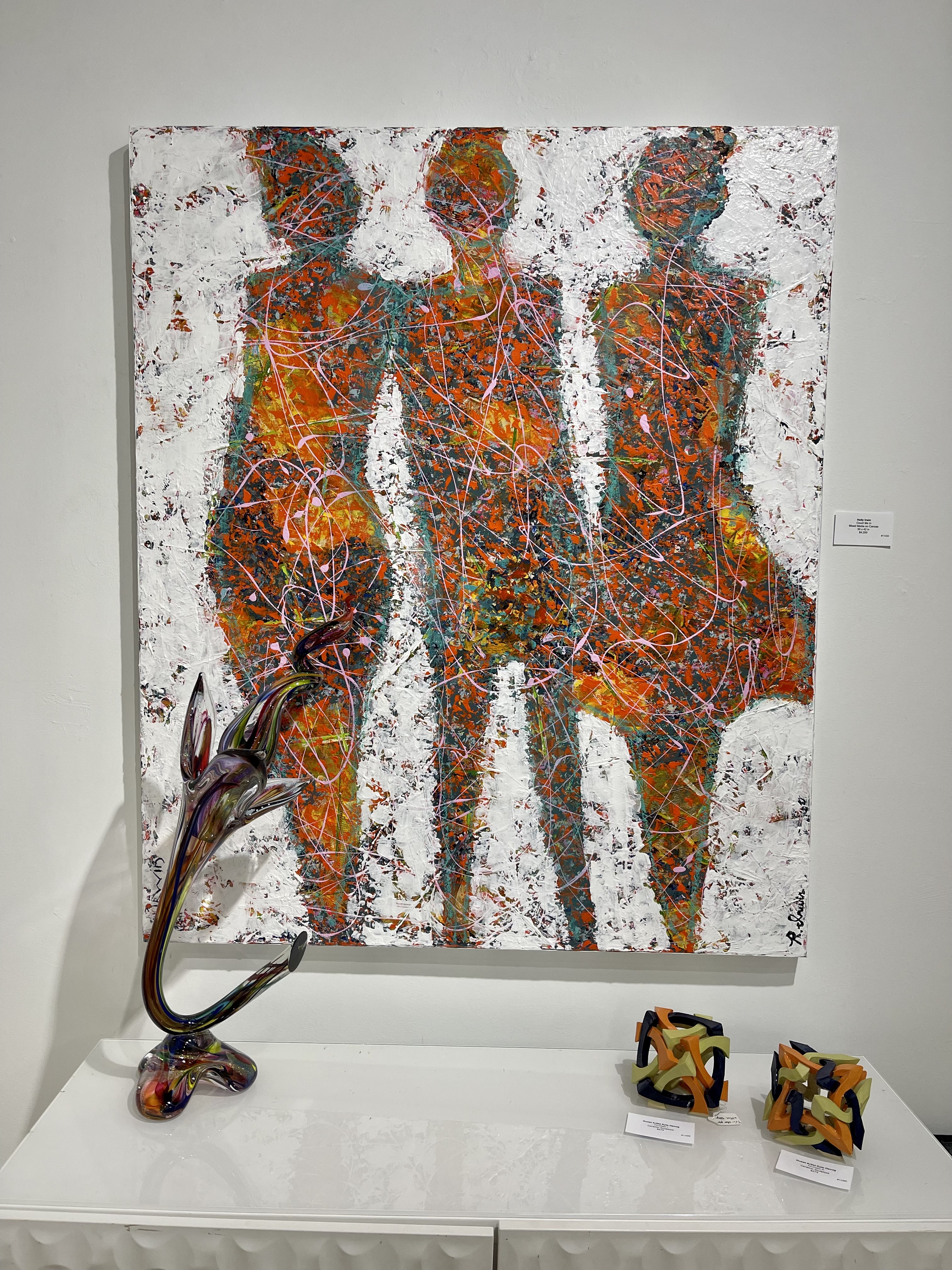 Because Ron is not a full time artist, he treasures the times when his work can be showcased in dk Gallery. Holly is always thrilled to have her work in the gallery and is even more excited when her husband’s work can hang right next to hers. They believe their styles balance each other out well and this makes collaboration pieces all the more fun. The Irwins consider dk Gallery to be a blessing in their lives. Before working with dk, Holly was with other galleries in the Atlanta and Buckhead areas. After leaving in 2011, she attended an artist market on the Marietta square and met Donna Krueger for the first time. Donna knew of her work and Holly ended up signing with dk and doing a show with them later that year. The Irwins appreciate how creative and high energy Donna and Kerry Krueger are when it comes to their work. dk Gallery has been able to grow into an incredible art destination that has had such an impact on the community and Holly said she could not be happier working with them after 10 years. 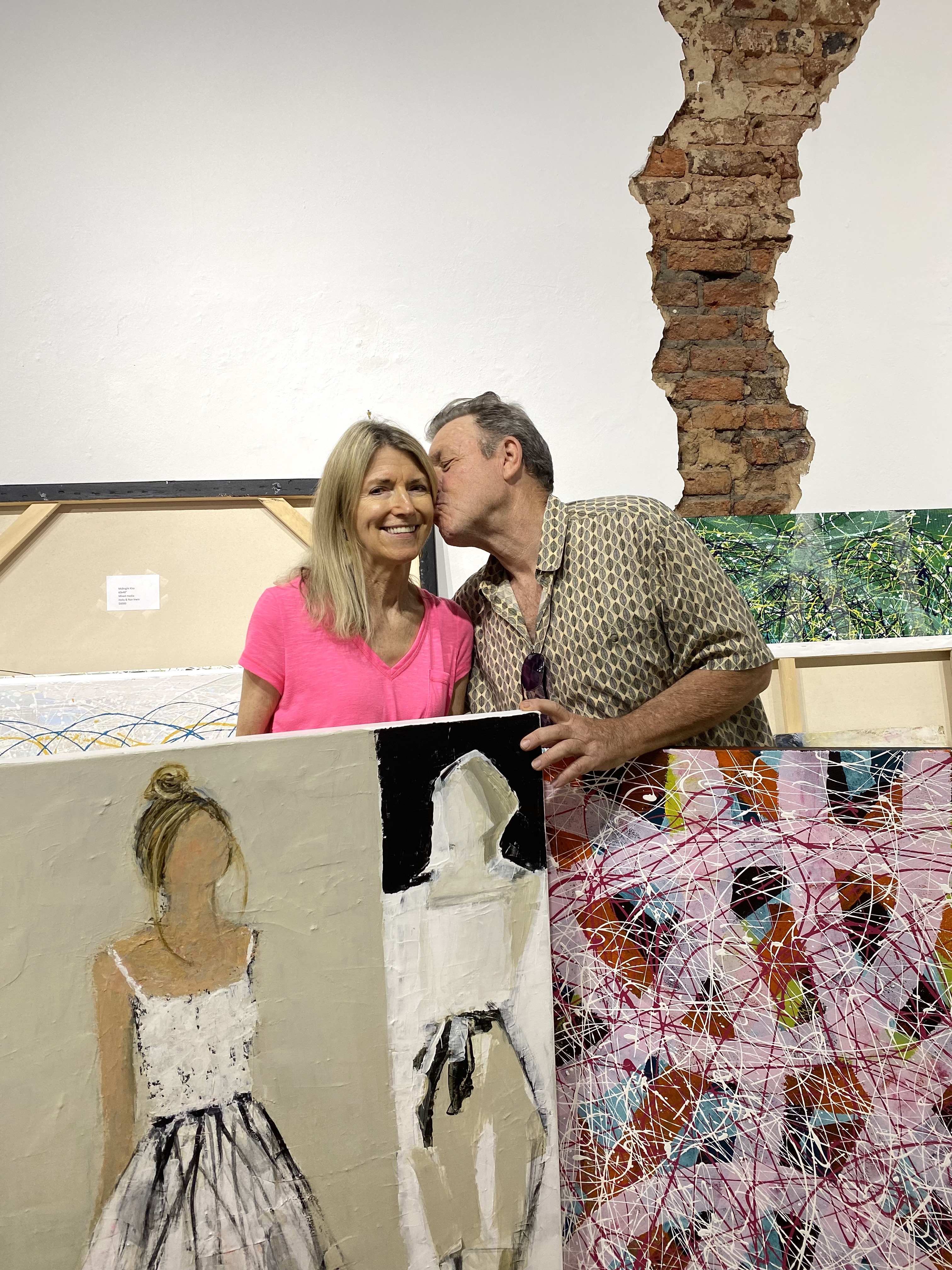 Despite Ron and Holly having lived in various cities, they believe the Marietta community is unlike any other when it comes to art. The support and enthusiasm everyone has towards artists and their stories has created such a genuine environment. The Irwins feel like a lot of this is due to places like dk Gallery and the culture it has helped cultivate; many people they have connected with at dk have become friends. People from different walks of life can feel free to appreciate art for what it truly is without the superficiality or pressure to buy a piece. Art is meant to bring people together and the Irwins believe there is no better place to share it than in Marietta.

To see the lovely works of Ron and Holly Irwin, please stop by dk Gallery on the Marietta Square. The work from the “Mr. and Mrs.” show will be here the entire month of September. Everyone is always welcome!