There is always an excitement surrounding younger artists when it comes to gallery shows; being able to see their style grow is something dk Gallery enjoys. For the upcoming August show, the gallery is looking forward to sharing the work of Jared Knox with the community, although many may already be familiar with his pieces. Fresh out of college, Jared is now making a career out of his art despite getting a degree in mechanical engineering. He always considered art to be something he did for fun but through the encouragement of his loved ones and journey with his faith, he has realized that art was what he was made to do. 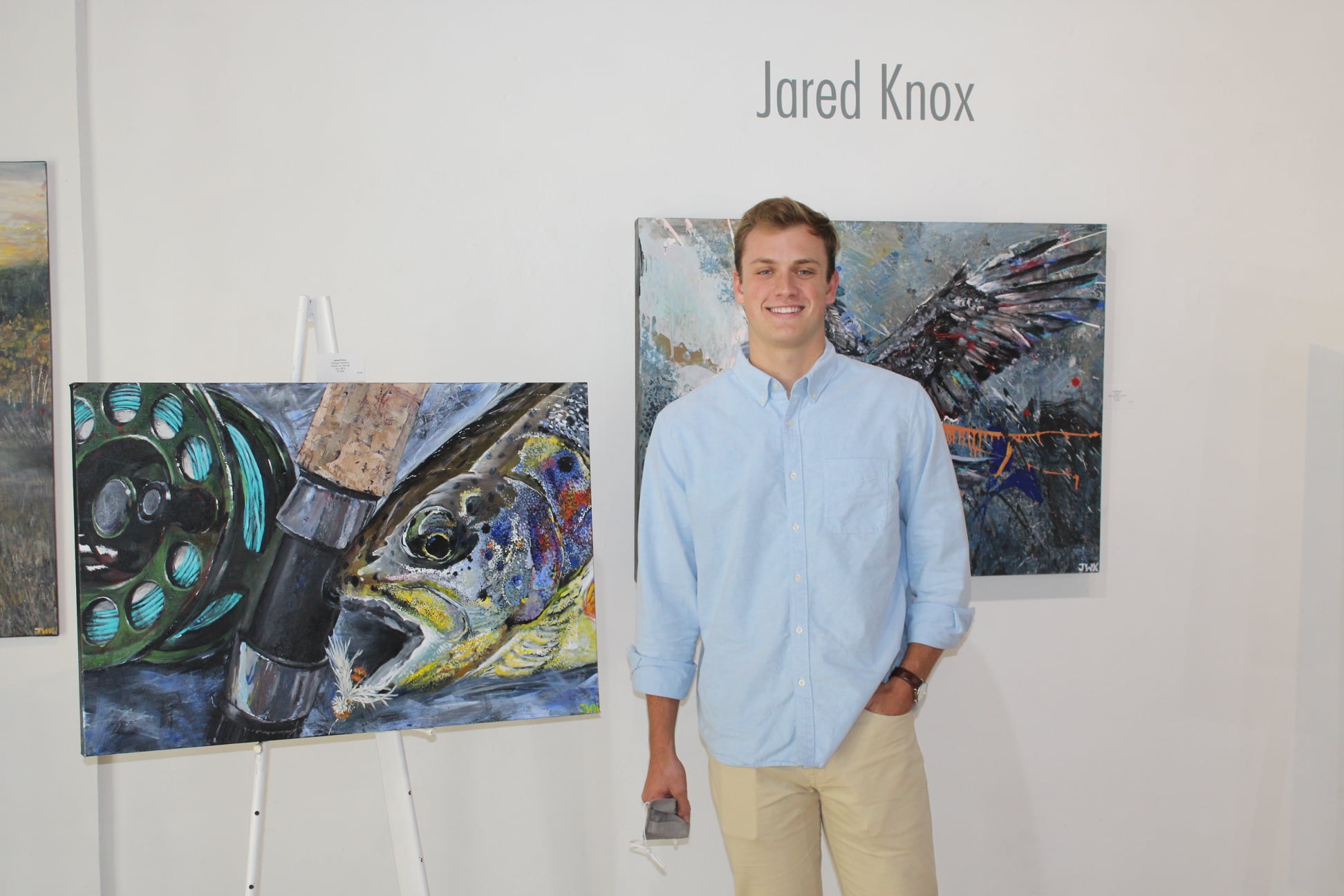 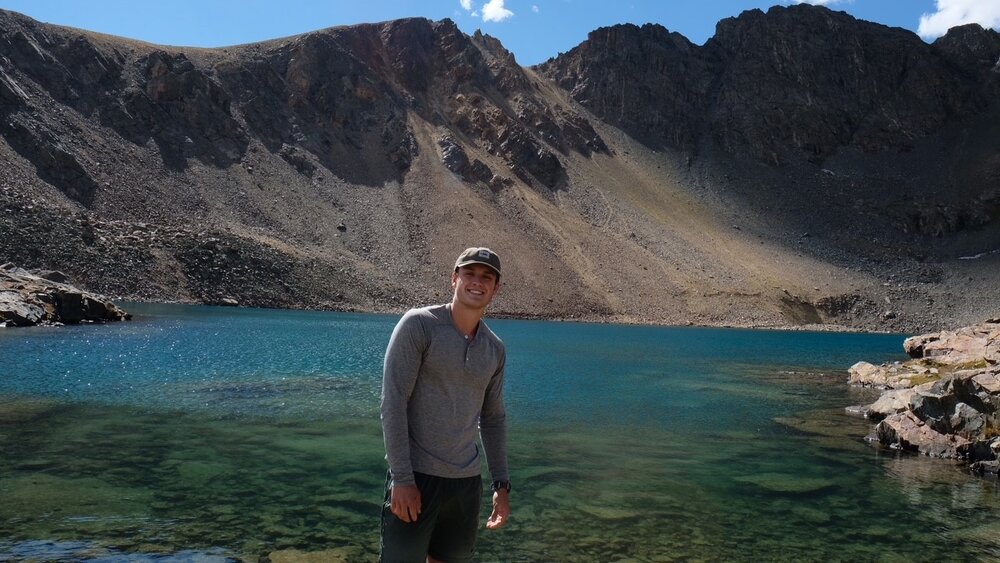 Knox always had a natural artistic gift. He remembers being able to draw and paint since he was a kid. When he was young, he took classes from Kristen Larson and accredits her to helping him fall more in love with the craft. Aside from the arts, Knox grew up an avid sportsman. He always enjoyed hunting, fishing, sports, and being outside. All influencing his subject matter today. Once he was in school, he became involved in athletics and thrived in this environment while still maintaining his artistic side. He considered art to be this special hobby that he could use to make some extra money or as a stress reliever, often finding himself constantly doodling in his school notebooks. Despite always having a positive relationship with art, Jared never thought he could make a career out of it. For years, he had only heard people say he would have a difficult time supporting himself as an artist. As long as he could always have art in his back pocket and enjoy it whenever he wanted, he thought that would be enough.

At Auburn University, Jared studied mechanical engineering with the intent to eventually join the family business. Going into college, he was not sure how art would play into his career at all but he enjoyed the creative aspects of engineering. As he got further along in his studies, he found his passion for engineering to be much less than that of his peers. It was not until his last semester at Auburn that he fully realized that engineering was not his passion. During senior projects, he saw his classmates happy to be there, interested in what they were doing. He wanted to feel this too, but he knew he could not feel it at that moment. Jared knew he had experienced this excited feeling before– in an art gallery. 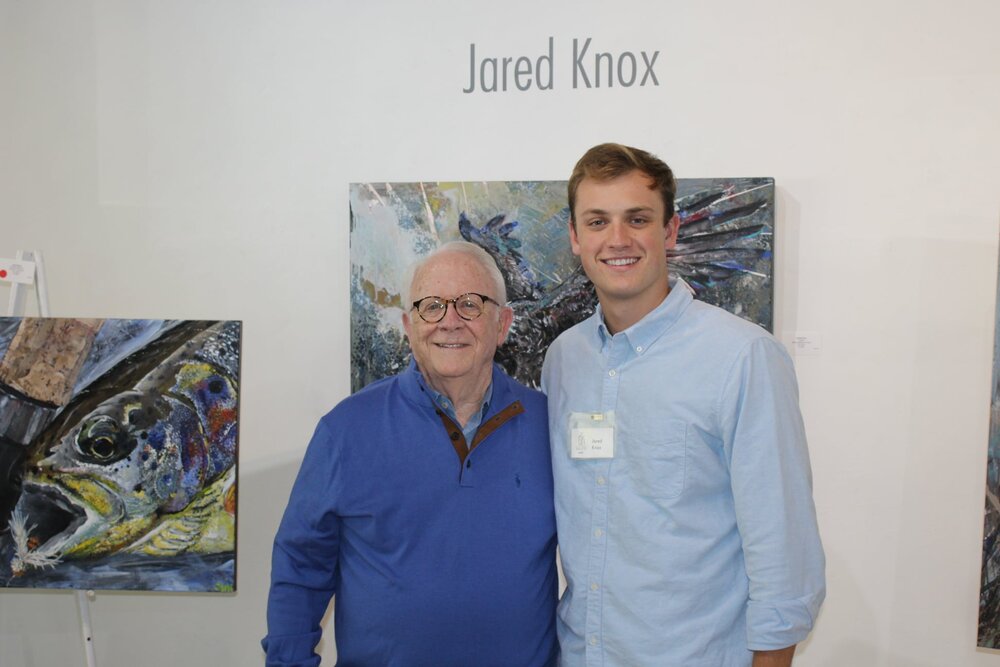 While simultaneously studying at Auburn, Jared got two art shows under his belt with dk Gallery. He first met Donna and Kerry through his parents who had previously bought art at dk and mentioned he was an artist. Donna asked if he would like to display some of his pieces in one of their 2017 shows entitled ‘PopStart.’ He remembers how exciting the experience of having his art on display was and feeling very free. Since he figured he would not be a full time artist, he allowed himself to have fun and not worry about how well he did. However, seeing how his art moved people really struck him. Knox aims to exude nostalgia through his work, giving people a specific memory when they look at his pieces. He does this by painting what gives him nostalgia such as nature, animals, and athletes. After this initial show with dk Gallery, he fell in love with getting to share his work with the community. And later did another show called “Twenty Something” with some other young twenty something year old artists in October of 2020. He adores dk because he feels they are rare in how they care about their people, and he is grateful for Donna and Kerry for believing in him. After grappling with whether to pursue engineering or art, Knox’s decision came to a head in December of 2020 when Donna reached out to ask if he would like to join the dk Gallery stable of artists. He described the feeling of having his heart sink in the best way because he knew what he needed to do. 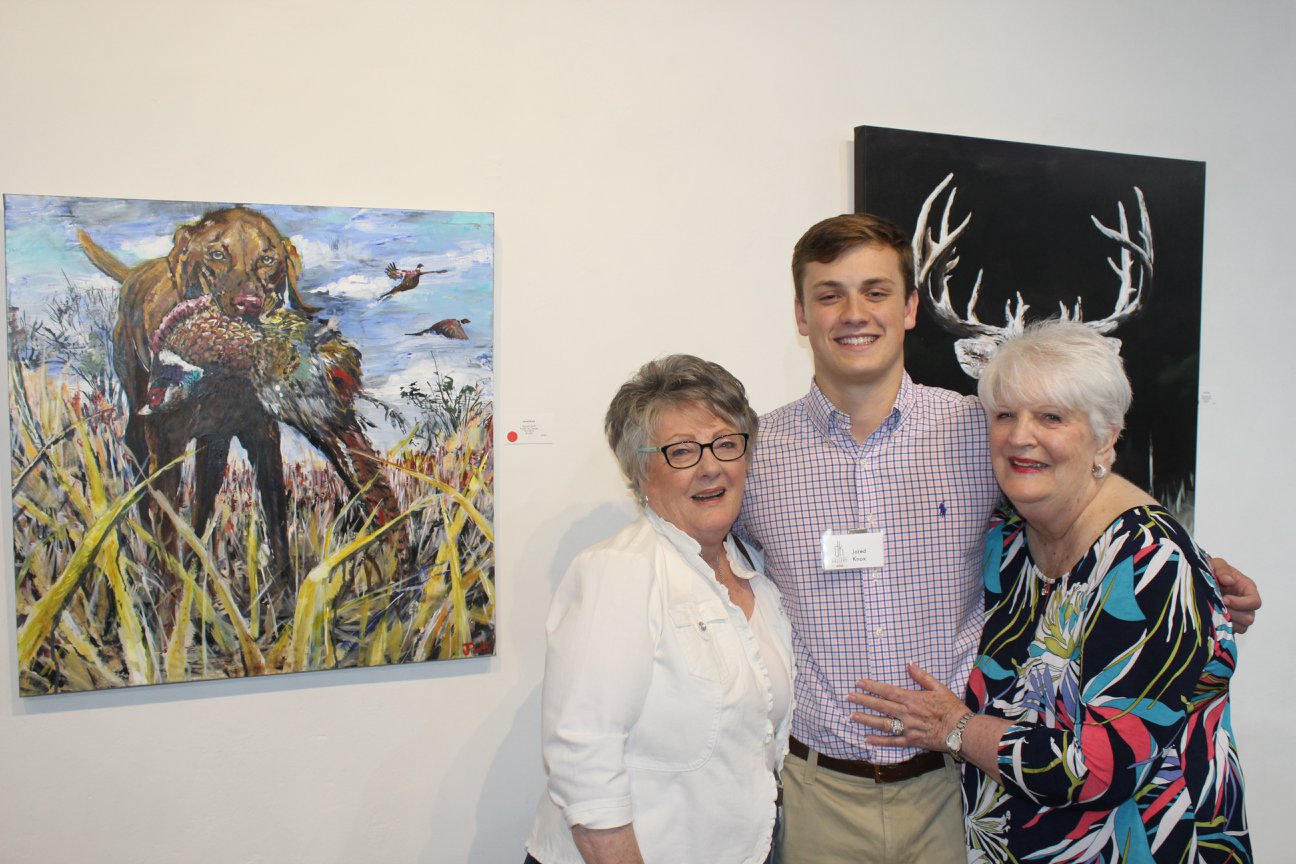 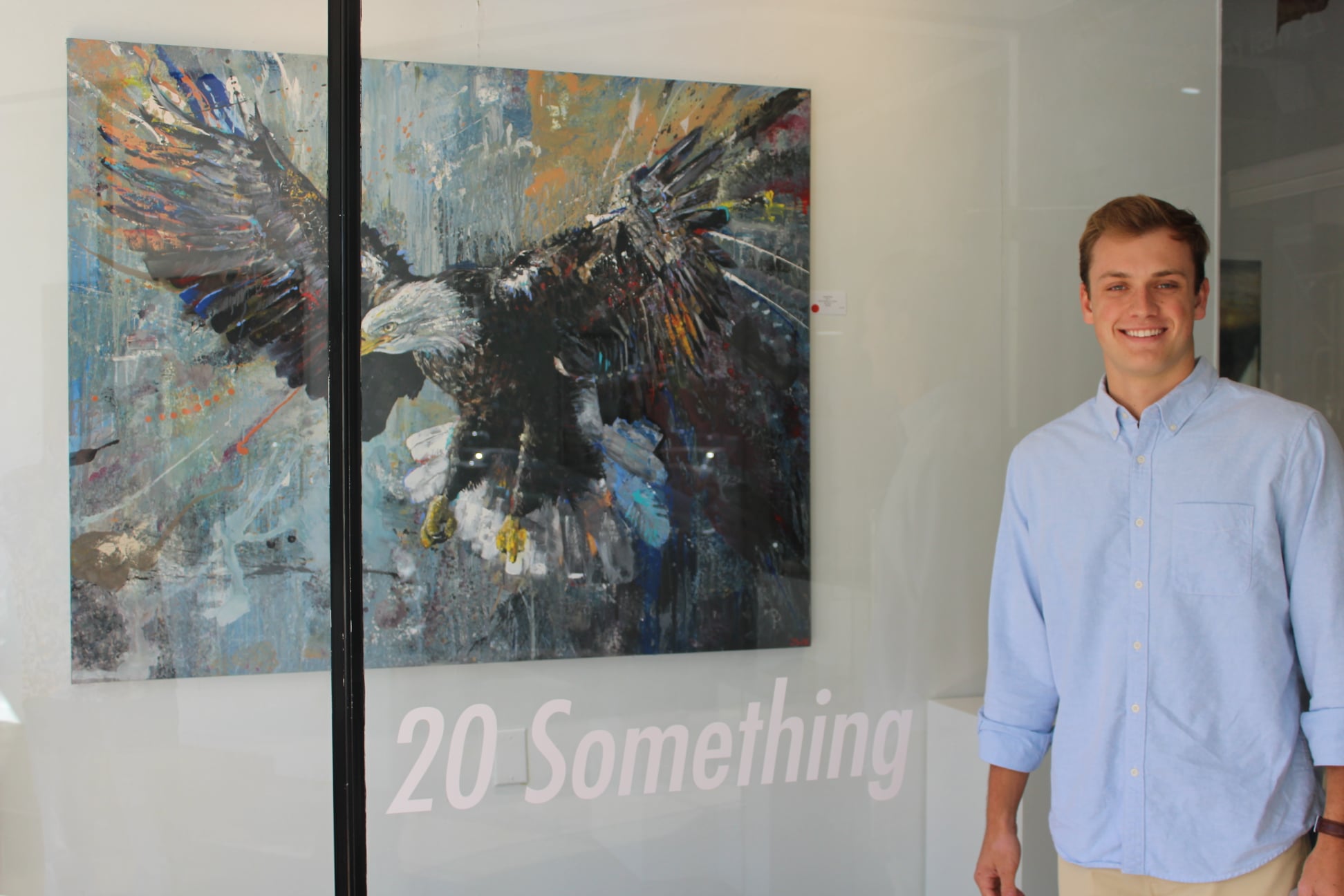 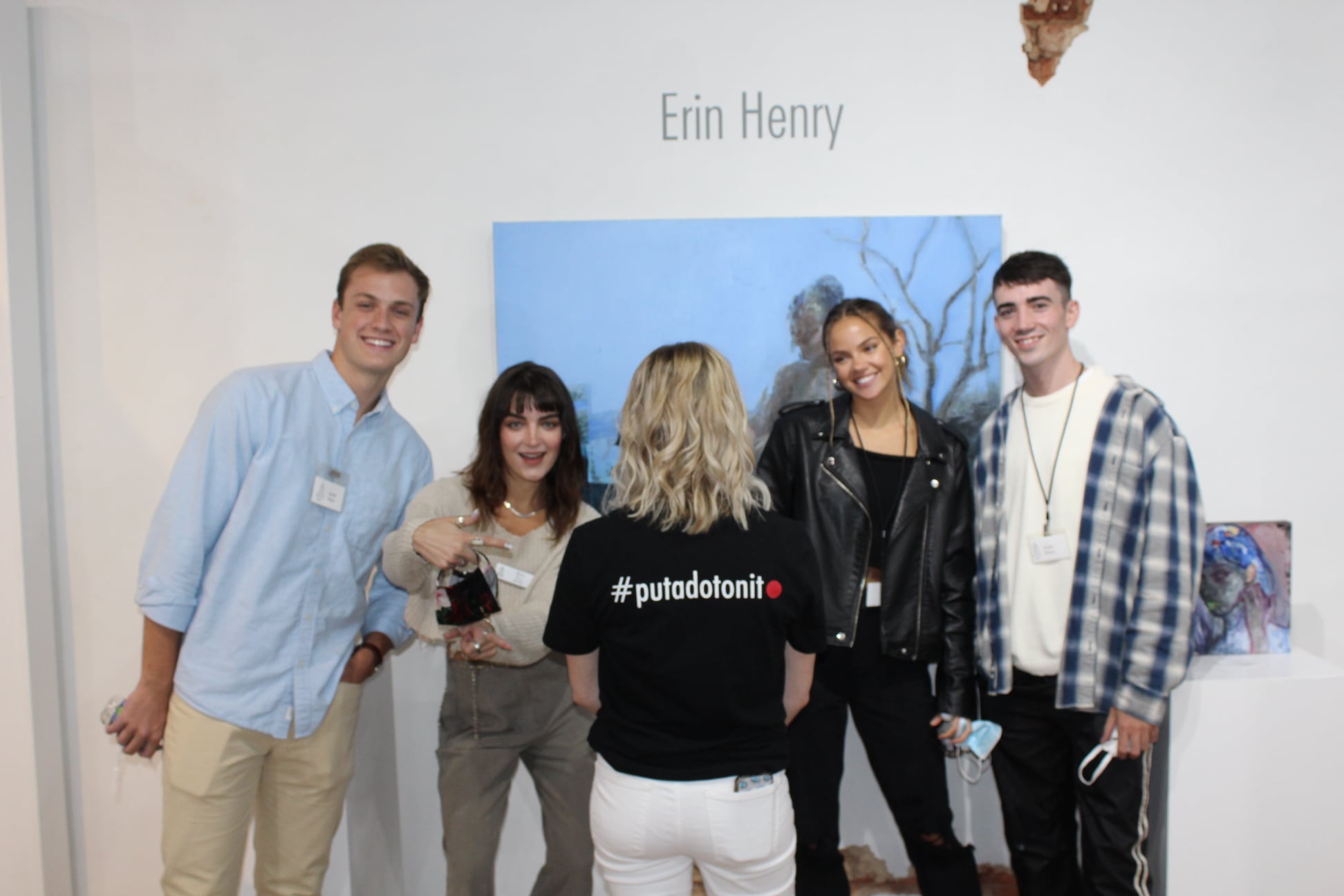 Now as a college graduate, Jared is pursuing art as a full time career. He is still not too far away from the family business, having set up his own art studio right next door. He decided to pursue art because it gives him freedom to not only partake in his passion, but be able to do mission work down the road. Faith plays a huge part in Jared’s life and he believes he would not be doing art as a career were it not for this. He feels he was given a natural ability to create art, but his dilemma was never knowing exactly what purpose it was for until recently. He is passionate about sharing the freedom he has found in his faith. When he realized that 40% of the world still has never heard of the Gospel, Jared realized what he wanted to do with this life. He wishes to use his gift to move people in the Marietta community and eventually all over the world as a missionary. Knox prayed for answers as to how he could support himself and have the flexibility to work from any part of the world he feels called to. After a while, he realized the career and skills he needed were right in front of him all along. In choosing to become a full time artist, he hopes to have the freedom and financial support he needs to live abroad.

Knox wishes that he had realized sooner what made him truly happy. For Knox, he said he was alright with being numb to what excited him for a long time, but the reality of him only having one life hit him hard. His hope for any conflicted young person is to picture themselves working in a job every day and ask themselves why they think they were created. He believes that being able to take a risk by doing what he truly loves and seeing what happens is the adventure that life invites. As frightening as it may seem to do something different than what was originally planned, Knox has never felt more free and he knows he is on the right path. He summarizes his feelings about his future in art with one simple but compelling word– joyful.

“At the end of the day, we only get one chance at life so we might as well do everything that we can to enjoy what has been given to us in the little time that we’re here. What I’m doing now is what I’m supposed to be doing; I know that because it’s making me feel more joyful than I ever have been before.” – Jared Knox 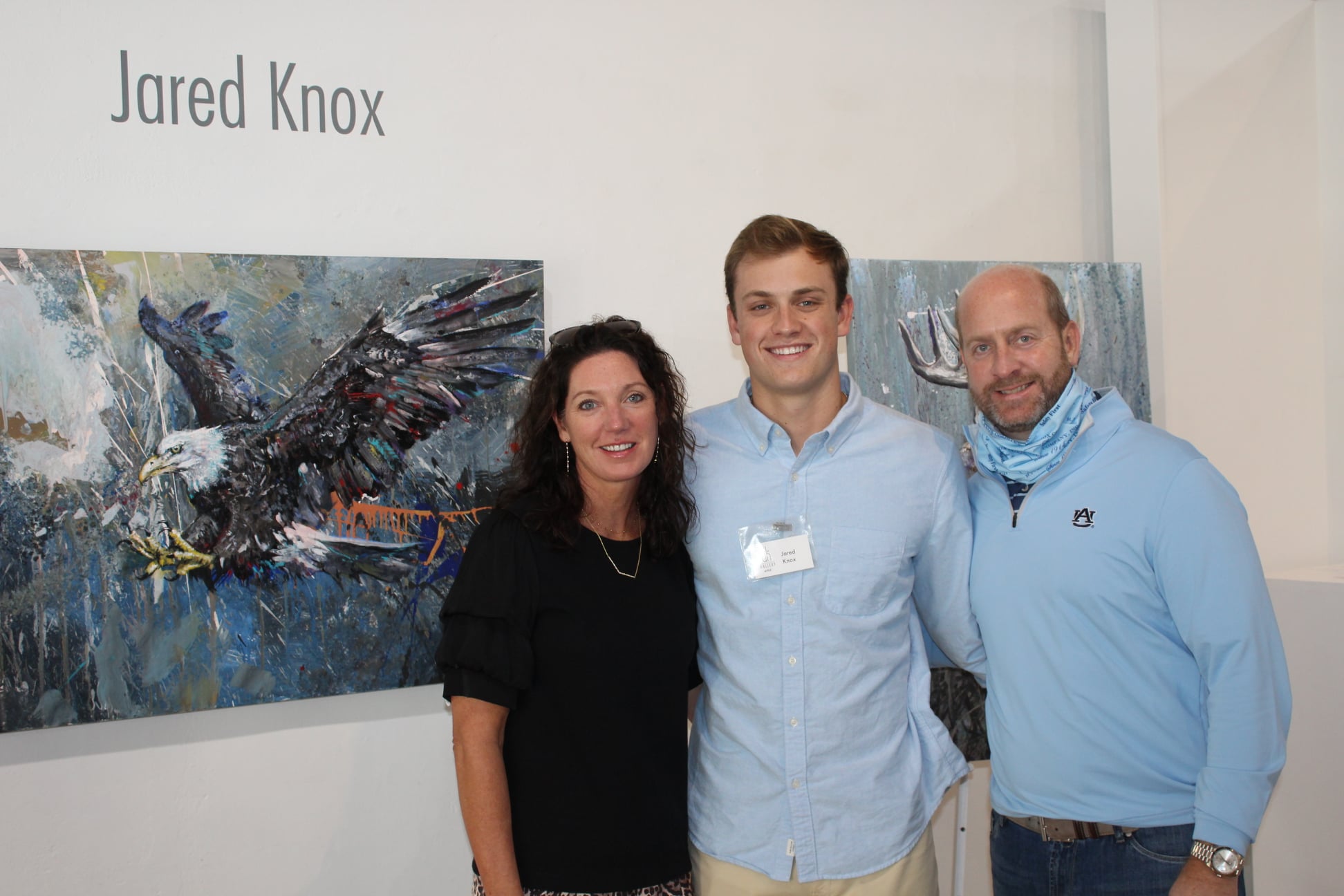